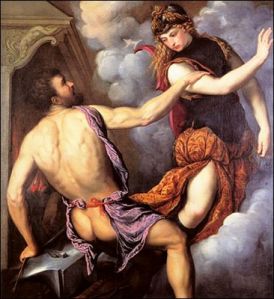 I carry my head as a quiver…
shoot down every advance…
but you have seen the flower between my ribs.

Every advance shot down
lay in a circle iron around – No more!
I will seize this chance like prey,
destroy this cycle inbred, bound.

In a circle iron round
many voices, not my own
echo the cycle inbred bound –
No more! I must go to Hephaestus.

My voice my own
reaches from mud thick molten rust
for Hephaestus, his art:
Craft of shifting shame to sterling.

I reach through thick molten rust
my tongue, flames for his fire –
to shift shame to sterling, the silence broken;
raven from dust risen.

My tongue, flame, flower
freed, from chain and iron
to raven now rising, risen
heart with no wish to die.

Freed from chain and iron
I come from Hephaestus,
with heart and lung
and no wish to die.

by Mark Hannan, from After Many Years Absent, © Studio Press 1993

In this elegantly choreographed work, Bordone has created a titillating play of dominance and submission between Hephaestus (Vulcan) and Athena (Minerva). Hephaestus is the aggressor in his attempted restraint of Athena, but his gesture is also one of palpable desperation. His exposed backside and his unstable pose make him appear vulnerable, more so perhaps than the armored goddess. She looks down with apparent displeasure, drawing her arm back in an ambiguous gesture that can be interpreted as self-protective withdrawal and perhaps as preparation for a backhanded swipe.

Sing, clear voiced Muse, of Hephaistos, renowned for his inventive skill, who with grey-eyed Athene, taught to men upon earth arts of great splendor, men who in former days lived like wild beasts in mountain caves. But having learned skills from Hephaestus, famed for his work and craftsmanship, they now, free from care, peacefully live year by year in their houses. Be gracious, Hephaestus, and grant me excellence and prosperity! –Homeric Hymn to Hephaestus

Hephaestus, the master artisan, broke the silence, Out of concern for his ivory-armed mother: “This is terrible; it’s going to ruin us all. If you two quarrel like this over mortals It’s bound to affect us gods. There’ll be no more Pleasure in our feasts if we let things turn ugly. Mother, please, I don’t have to tell you, You have to be pleasant to our father Zeus So he won’t be angry and ruin our feast. If the Lord of Lightning wants to blast us from our seats, He can – that’s how much strong he is. So apologize to him with silken-soft words, And the Olympian in turn will be gracious to us… I know it’s hard, mother, but you have to endure it. I don’t want to see you getting beat up, and me Unable to help you.” Iliad I: 603-21, Lombardo translation

For poetry buffs, here’s a description of the Sestina form:

The name Sestina is derived from the Italian sesto (sixth).
Historically, the Sestina is a French form. It appeared in France in the twelfth century, initially in the work of Arnaut Daniel. He was one of the troubadours or court poets and singers in the service of French nobles.
Troubadours were lyric poets. They began in Provence in the eleventh century. For the next two centuries, they flourished in South France, East Spain, and North Italy, creating many songs of romantic flirtation and desire. Their name is from the French trobar, to “invent or make verse”.
The Sestina was one of several forms in the complex, elaborate, and difficult closed style called trobar clus (as opposed to the easier more open trobar leu).Form:
In a traditional Sestina:
The lines are grouped into six sestets and a concluding tercet. Thus a Sestina has 39 lines.
Lines may be of any length. Their length is usually consistent in a single poem.
The six words that end each of the lines of the first stanza are repeated in a different order at the end of lines in each of the subsequent five stanzas. The particular pattern is given below. (This kind of recurrent pattern is “lexical repetition”.)
The repeated words are unrhymed.
The first line of each sestet after the first ends with the same word as the one that ended the last line of the sestet before it.
In the closing tercet, each of the six words are used, with one in the middle of each line and one at the end.
The pattern of word-repetition is as follows, where the words that end the lines of the first sestet are represented by the numbers “1 2 3 4 5 6”:1 2 3 4 5 6 – End words of lines in first sestet.
6 1 5 2 4 3 – End words of lines in second sestet.
3 6 4 1 2 5 – End words of lines in third sestet.
5 3 2 6 1 4 – End words of lines in fourth sestet.
4 5 1 3 6 2 – End words of lines in fifth sestet.
2 4 6 5 3 1 – End words of lines in sixth sestet.
(6 2) (1 4) (5 3) – Middle and end words of lines in tercet.

I value your thoughts & opinions. Please share them. Thank you! Cancel reply